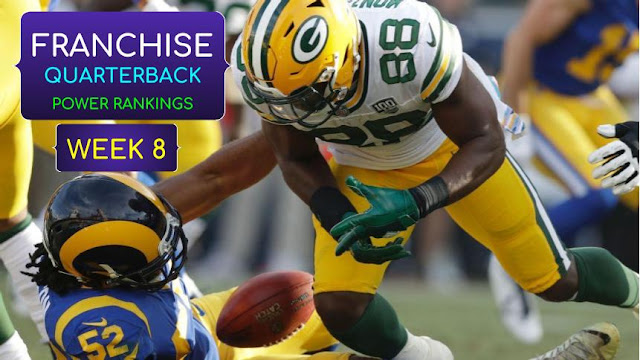 It seems the NFL has finally settled down. The top ten teams in the league are solidifying their spots while the bottom five are doing the same. The worst teams in the league have started selling off spare parts to build for the future. On the other side, the contenders of the league are happy to pick these players up at discounted values. There’s reports this could be the craziest trade deadline in years, so enjoy these pre-trade rankings.

Real quick let’s reiterate. Now that we’re into the season, teams will move up or down a lot based on trades, injuries, or big wins or losses. Who the opponent was, how close of a game it was, and just in general how good the team looked will be considered more than just getting the victory.

For the second time in four weeks, the 49ers proved they are the worst team in the league. Arizona is awful and they handled San Francisco once again. Let’s stay positive, though. If the 49ers draft Nick Bosa or Ed Oliver and use their cap space to acquire free agents while Jimmy Garoppolo and Jerick McKinnon make full recoveries, the 49ers could be scary in 2019.

With another trade and reports of their quarterback crying on the field, the Raiders could either come out and fight for their lives or roll over with a coach they don’t believe in. Despite the loss, they clearly chose the former. Gruden’s remaining guys came out and fought and even had a fourth-quarter lead.

Just to clear it up for everybody, Arizona is not a good team. Arizona can still beat even worse teams. The team has little talent and doesn’t know how to use the talent it does have. They play hard, though, and will win some games against the 49ers of the world.

At least the Giants know they suck. New York is selling off their few decent veteran players in exchange for draft picks to help in the rebuild. Eli gets his final ride, even if it isn’t pretty, and the Giants are set up for the future with another top-three draft pick. Win-win.

Give a lot of credit to Buffalo, around 14 point underdogs heading into the game, for hanging in as long as they did against the Pats. They played great defense and even busted out the wildcat. Most people will just see a 19 point loss, but the Bills were only down six at the end of the third quarter.

Other than a 70 yard Tarik Cohen touchdown that showed the dangers of all-out blitzes, the Jets defense did a great job shutting down a Bears offense that came into the game with recent success. If Sam Darnold and the offense picked up the slack, the Jets could have pulled off the upset.

The Browns looked lifeless at times against Pittsburgh. That games unimportant with the great news that came out of Cleveland Monday. The Browns finally cut the cord on Hue Jackson after going 3-36-1 in his two and a half years in charge and clearly holding his team back this year. Offensive coordinator Todd Haley went out the door with him, which is probably the right idea with how the offense has struggled.

Miami has fallen all the way back to reality. We know who Brock Osweiler is, and it’s not good. When Ryan Tannehill returns, he’s not all that much better. Even the defense, which kept them in games for a while has been awful recently. Being the team to bust the Texans offense out of their slump is not ideal.

Marlon Mack and the Colts run game have been one of the more pleasant surprises of the year. Since Mack returned two weeks ago, he has 308 total yards and 4 touchdowns. If their run game continues, the Colts could have a great offense next year with Andrew Luck throwing it. If only the same could be said about that defense.

With Jameis Winston back on the bench after another shaky performance, do the Bucs consider moving on from the former number one pick before the trade deadline? A team would probably be willing to give up a decent pick to have Jameis as a backup this year with intent to mold his raw tools. Ryan Fitzpatrick took over for Winston and nearly lead a magical comeback win over the Bengals.

At 3-4, Atlanta is technically in the playoff picture, but they don’t have a chance. Since all the injuries, they’re only wins were close affairs against the Bucs and Giants. After their bye, the Falcons hope to add another win in Washington.

In week four, the Broncos nearly beat the Chiefs before a late Patrick Mahomes ended their upset bid. They gave the Chiefs a fight again this week before falling to an unbelievable Kareem Hunt touchdown catch. That’s likely how the Broncos will be in most of their games -- they can give great teams a threat, but don’t have the weapons to win. It might be the right move for the Broncos to sell some pieces and start over.

After a tough loss in London stemming from a questionable decision to go for two, the Titans had a week off to recuperate. They get an extra day off too, as their next game is Monday Night in Jerry World.

Jacksonville’s slide continues. At least this week they were competitive. Having lost four straight, the Jaguars get a much-needed bye week to answer their many questions. Do they roll with Blake Bortles or Cody Kessler? Or trade for a better option? Do they trade from a strength like defensive line to help in that trade?

Beating the Seahawks would’ve been huge for the Lions. They would’ve been 4-3 and riding a three game win streak, with a potentially important over Seattle in hand. Now they’re back under .500 with a tough road ahead.

The Cowboys clearly thought they had a great opportunity to merge present with future in acquiring 24 year old receiver Amari Cooper. We’ll see how Dallas utilizes their new weapon on Monday Night Football against Tennessee.

The Bengals came dangerously close to blowing an 18 point fourth quarter lead. It never would have been such a big lead if the Bengals didn’t have Jameis Winston generously feeding them interceptions. It counts as a win, but it was anything but convincing.

Baltimore should be embarrassed by their performance Sunday. Number one in almost every category coming in, the Ravens defense drops down in the standings after being shredded by Carolina. The offense didn’t provide much help by getting only one good drive outside of garbage time. Even though the Panthers had some lucky plays, that was ugly.

Seattle might be for real. They’re winning the ways of old, with a historically great defense and ball control offense. They still have a great quarterback in Russell Wilson and a strong running game supporting him. A wild card berth is a possibility.

Houston's offense woke up Thursday against the Dolphins. Lamar Miller rushed for 133 yards while Deshaun Watson threw for five touchdowns. With a good and sometimes great defense, an improved Texans offense could make them dangerous.

Green Bay put up a great fight against the last undefeated team in the league. They were up early then had a chance to win late. Then Ty Montgomery decided to put the game in his hands. Unfortunately for the Packers, Montgomery’s hands are not trustworthy as he fumbled a kick return he should have knelt on. Rodgers never got a chance to win the game and the Packers fell.

The Redskins continue on their roll, though they likely would’ve wanted a more comfortable win against a terrible Giants team. While the Redskins could still win the division, actually being a threat in the playoffs seems unlikely. Management will still be happy with a playoff berth to show they don’t need Kirk Cousins.

In essentially a must-win game, the Eagles got their win. In London, against a Jaguars team that essentially lives there, Philadelphia controlled the game. At 4-4, it hasn’t seemed like it, but the Eagles are still up there with the best teams in the NFC.

Khalil Mack, who hasn’t made the same impact the last few weeks as he did the first few, missed the Jets game with what appears to be a somewhat serious ankle injury that could linger. That’s a big blow for a defense that was in the conversation of the best in football. Without Mack, the Bears playoff chances are in danger.

In the NFL, sometimes the ball just bounces your way. It definitely bounced in Carolina’s favor and they took advantage. Besides the luck, the Panthers strung together four great quarters of football for the first time this season. Previously they’ve started fast or made a comeback attempt, but Sunday they dominated a good team from start to finish. Cam Newton has to be at least considered in MVP talks.

Minnesota had some tough breaks in their loss to the Saints. The Vikings were up 13-10 and driving before Adam Thielen fumbled. The Saints capitalized to make it 17-13. After that, the Vikings turned it over on downs and threw a pick-six. Cut out the mistakes and they have a great chance to win the game.

The Browns always play the Steelers tough, so it was a good sign to see the Steelers pull away in the second half. Early on, the pass offense was flustered, but they figured it out and James Conner went off. If Le’Veon never returns, Pittsburgh probably won’t be that mad.

With a great record despite missing arguably their best player, the Chargers got a week off to regain their health. Now, star pass rusher, Joey Bosa, has a chance to make his season debut in Seattle.

Despite not playing their best ball early in the season, the Saints are in a great position at 6-1. They’ve really picked it up the last few weeks and are a legitimate Super Bowl contender even with a mediocre-at-best defense. 100% of credit goes to Taysom Hill for being a badass quarterback-running back-returner hybrid.

Kareem Hunt doesn’t get nearly enough credit or attention. It takes a ridiculous touchdown like the one he had Sunday for people to talk about him. Don’t look now, but the Chiefs defense had another strong performance. The rest of the league should be scared.

The Patriots reported search for another receiver makes sense given how much their weapons struggled to get open against Buffalo. Even when they were open, Tom Brady missed them too often. Divisional rivals always pay you tough, but the Patriots performance was very disappointing nonetheless. For the first time in a while, New England relied on their defense for to get a win.

For the first time this season, the Rams were not the better team on the field. Their electric offense was shut down early and they’d likely be looking at their first mark in the loss column if the Packers capitalized. They still pulled out the win and are comfortably sitting atop the league.


Think your team is ranked too low? Or just in general think I know nothing about football? Go crazy in the comments.