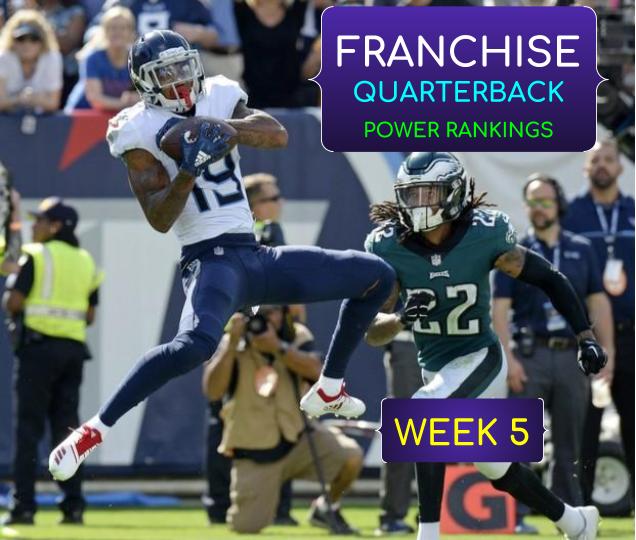 Compared to last week’s insane results, Week 5 was a lot more calm. A shocking undefeated team got destroyed in their first loss, the Patriots bounced back, and the Bills went back to looking like they might not belong in the league. Most of the teams we expected to be towards the top of the league are now starting to play like it, while the same is true for the bottom of the totem pole teams.

Once again, now that we’re into the season, teams will move up or down a lot based on trades, injuries, or big wins or losses. Who the opponent was, how close of a game it was, and just in general how good the team looked will be considered more than just getting the victory.

Arizona came so close to their first win. They played hard, but saw their terrible roster hold them back again. Seattle’s backup running back had over 100 yards and two TDs. The offense didn’t help much either, with Josh Rosen throwing for less than 200 yards and David Johnson struggling again.

The Bills’ resurgence came to an abrupt and ugly halt Sunday. The Vikings game seemed flukey for many reasons and after another blowout loss, we know it was. Tanking for Nick Bosa or Ed Oliver isn’t such a bad idea, though.

The Jets were absolutely dominated by the Jaguars. They could barely move the ball and the defense was torched by Blake Bortles. Their trend of getting less and less competitive is concerning.

I really don’t care that the Texans got their first win. The Colts aren’t that good and essentially handed Houston the game. The Texans are still not fixed, but a win could be the jumping-off point for improvement.

You have to admire the 49ers fight Sunday. Fight doesn’t win many football games, though. Talent does and the 49ers are severely lacking that at the moment. Kyle Shanahan gives them a lot of advantages with his schemes and then has to watch C.J. Beathard miss the receivers he frees open.

For a team that just got their first win, the Raiders have been surprisingly competitive all year long. You could say the Browns deserved that win, but it was Oakland that came out on top. And after Oakland had been terrible in fourth quarters, a comeback win was a nice surprise.

Sunday, Indianapolis epitomized the phrase snatching defeat from the jaws of victory. Despite Houston scoring 14 points off two fumbles, the Colts found themselves in overtime. In overtime, we learned that it was not Chuck Pagano’s fault for the infamous play against the Patriots. As it turns out, any head coach of the Colts is forced to make terrible play calls by some strange force of nature. His decision to go for it on a 4th-and-5 likely kept that game from being a tie.

Seattle showed again Sunday they belong in the lower tier of teams. While they got the win, they were just as close to giving the Cardinals their first win. Outside of Russell Wilson, the Seahawks are pretty poor in every area.

Sadly, the Lions miraculous jump from getting destroyed by the Jets to dominating the Patriots did not last. They allowed one of the worst offenses in the league to go over 400 yards. On the bright side, the team is still giving their full effort, a great sign for Matt Patricia not being one-and-done.

Many thought the Giants had a chance to upset the Saints or at least make it a competitive game. Clearly the Giants did not share that thought process. Considering the game was competitive, Saquon Barkley getting just 10 carries is asinine.

Similar to the Dolphins, the Bucs underdog story has officially ended. Ryan Fitzpatrick is back to being an average backup and the defense is awful. There’s no semblance of a run game to help new starter Jameis Winston. They have good receivers, though, so I guess that’s nice.

With everyone calling them a fake undefeated team, the Dolphins had a great chance to legitimize themselves against the Patriots. Instead, they looked every bit like the awful team we expected.

Unsurprisingly, the Browns choked away a chance at their first back-to-back wins in years. Baker Mayfield was underwhelming in his first start. At least he was aggressive, as decision-making is easier to improve with experience than fear to take chances.

The Broncos should have won that game. Their run game was nearly unstoppable, no matter who it was pounding the rock. So what do the Broncos decide to do? Give their backs only 21 combined carries. Not only was their run game setting them up for touchdowns, but keeping Patrick Mahomes and the Chiefs offense off the field -- the way to beat Kansas City.

Finally playing through their run game, the Cowboys offense looked so much better. Dak Prescott benefitted from the defense keying in on Ezekiel Elliott. If they can continue to do that, they have a good enough defense to compete for the playoffs.

The Redskins had their bye this week. Not ideal for a team riding high after upsetting the Packers and without too many injuries. They return Monday night against the Saints.

By year’s end, the Steelers are probably going to be one of the better teams in the league. But at some point they have to start playing like it. Their defense allows way too many big plays and the offense is clearly missing Le’veon Bell.

Another week, another ugly win for the Titans. And Mike Vrabel should be ecstatic. If they can continue to capitalize off the mistakes of their opponents and turn them into wins, Tennessee will be back in the postseason. While they won’t be much of a threat, being there is great regardless of how they get they there.

After the Saints beat them by one last week, the Falcons nearly edged out the Bengals. If half their defense wasn’t injured, they could be dangerous. In reality, their last couple games are likely a preview of how Atlanta will sit in the playoff picture -- in it to the end before ultimately getting beat out.

The Bengals defense is one of the biggest disappointments of the year. They had potential to be one of the best in the league, but have been torched often. The reason the Bengals are 3-1 is the offense has picked up the slack.

We here at Franchise Quarterback gladly welcome Minnesota back to the league after their pathetic loss last week. It’s seemingly impossible to beat the Rams, so having a chance to win late in the fourth quarter is impressive. However, the defense is concerning until the Everson Griffen situation is resolved.

We know the Bills are spectacularly bad, so there’s no props for beating them. Still, holding them under 150 yards and no points is impressive. They needed some help from the defense because Rodgers is still not right.

Baltimore is legit. Flacco is much better than year’s past, largely due to the fact he actually has a receiving core now. He’s surrounded by a good running game and great defense. Don’t be shocked if the Ravens are still playing in late January.

Congratulations to the Panthers for being one of the only teams in NFL history to win their bye week. The safety position was by far the biggest weakness on the team and while many disagree with Eric Reid’s political stance, he’s starting-caliber. Starting guard Trai Turner is also likely to return next week.

I originally expected the Philly defense to be dominant behind a loaded defensive line. Instead of backing that up, they’ve arguably held back the team. Everything will get better once Carson Wentz has a few more weeks under him. As we saw last year, he makes everyone better.

I’ve believed in the Bears all year. The only thing giving me reservations was Trubisky. He shut everybody up Sunday, dominating the game and throwing six touchdowns. If he can maintain that, the Bears will win the Super Bowl. We know he won’t though, so the Bears will have to settle for their first playoff berth in eight years.

The Chargers were dangerously close to losing to a team starting C.J. Beathard. The defense needs Joey Bosa to return badly to become respectable. With him out, the offense has been forced to carry the load. They are talented enough to do so, but are seemingly just as likely to turn it over as score a touchdown.

The recent play of the Patriots prompted many to call the end of the dynasty. But the one thing we can always count on from Belichick and Brady is keeping the AFC East on lock. Maybe this was the get-right game for the evil empire, or maybe they just beat up on a bad and familiar opponent.

The Saints loss to the Buccaneers is now far in the rear-view mirror. They are starting to look more like the trendy Super Bowl pick than a team in danger of missing the postseason. With Mark Ingram II returning this week, the Saints offense could join the top tier of the Chiefs and Rams.

With any consistency from the team and Blake Bortles, especially, the Jags would be the Super Bowl favorites. Since we can’t count on Bortles to throw a pass deeper than 10 yards, all the other talent on the roster could end up going to waste.

The Chiefs were able to overcome their first real adversity of the year. In their first three games, the Chiefs jumped out to huge leads and were able to play safer. Monday night, it was actually the Broncos who struck first and the Chiefs offense was stifled for a while. Coming back to win this game legitimizes the Chiefs more than another blowout win would’ve.

Jared Goff is so much better than his first two years in the league. His emergence has taken the Rams to a whole new level of unfair. They can shut you out or drop 40 in a shootout. Going all in on Super Bowl 53 is paying off.

Think your team is ranked too low? Or just in general think I know nothing about football? Go crazy in the comments.