Who Won the NFL Draft? Not the Giants 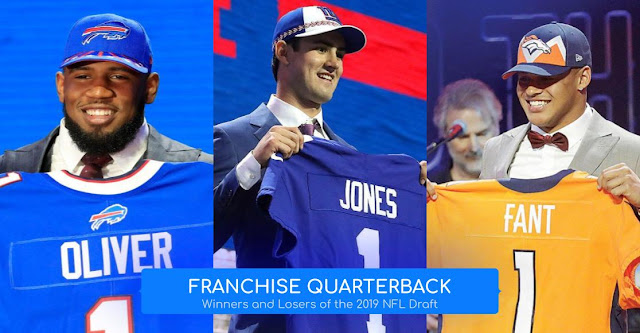 The 2019 NFL draft is now in the books. While it was so unnecessarily long, it brought hope to a number of fan bases that couldn't find much during the 2018 season. Many of the top teams in the league also had drafts indicative to staying on top. But, as there is every year, there were also a few teams with mind-boggling selections all weekend. Now, let's get into who I think performed the best and worst at the three day spectacular.

Note: In parenthesis is the overall selection at which the player was taken.

Reasoning: The Bills underrated draft continues a trend for this team. A subtly-great free agency got almost no recognition and now a similarly great draft isn't getting enough credit. Ed Oliver is the number one candidate for the guy we look back on in a few years and say "how the hell did he last to pick nine?" Buffalo came back in round two to take arguably the best offensive lineman in the draft, Cody Ford. Round three saw them snag a potential replacement for pending free agent LeSean McCoy in Devin Singletary, a player whose pro-player comparison was often Shady. General Manager Brandon Beane kept his hot streak going early on day three with steals at tight end and linebacker. The rest of their picks were nothing special, but expecting that in rounds 5-7 is unrealistic. Following up last year's great class with another one has the Bills poised to make noise in the near future.

Reasoning: This has to be the most unexpected winner from the weekend. The Washington franchise seems to rest on the edge of anarchy annually, yet Bruce Allen calmly walked into the draft room and killed it. Dwayne Haskins is a legit potential franchise quarterback and the Redskins were able to get him without having to trade up. Montez Sweat was one of the draft's biggest risers before a heart condition pumped the breaks. But considering many say the condition was overstated and his immense potential, this was a great pick. With the tools to be a very good receiver, McLaurin was good value in the third round. After a near Heisman-winning 2017 campaign, injuries derailed Love's 2018 season, but there's enough talent there to attempt to salvage with a day three pick. Being the team to stop Kelvin Harmon's free fall was also a genius move. Let's just hope Jay Gruden can coach up the players he had no idea he was getting.

Reasoning: Many mock drafts, mine included, had Drew Lock going to the Broncos at pick 10. To get a quarterback with all the tools to be a star in the 2nd round is great value. Instead of taking Lock in the first, Denver traded back and picked up matchup-nightmare tight end Noah Fant. The day 2 haul outside of Lock was also stellar. Dalton Risner is arguably better than a couple of the lineman who got their names called on Thursday night. Ohio State alum Dre'Mont Jones was amazing value in the 3rd round. Don't sleep on 5th round edge rusher Justin Hollins, either. For a general manager as frequently scrutinized as John Elway, this seems to be a great class.

Reasoning: Early on, it looked like the Raiders might end up in the losers section. Clelin Ferrell was unquestionably a reach at pick four. However, the pick is more understandable when you consider Ferrell was the best 4-3 defensive end available and a great leader, something the Raiders need after shipping out multiple last year. It is even more palatable when you throw in all the other players Mike Mayock and Jon Gruden acquired. Josh Jacobs was the number one running back in the draft and the rare backfield prospect without extreme wear-and-tear. Johnathan Abram was the top safety and a tone-setter for a defense that needs one. Sprinkled in over the next two days were a great corner, immediate contributors at tight end and wideout, and a couple high-upside flyers. It was obviously easier for the Raiders than other teams given their bevy of picks, but Mayock knocked it out of the park in his first try.

Reasoning: This one is pretty self-explanatory. No draft pick in recent memory has recieved as much universal hate as the Giants selection of Daniel Jones at sixth overall. Dave Gettleman can claim all he wants that Jones wouldn't have lasted to seventeen, but the reality is this is just another horrible decision by the soon-to-be-former New York general manager. The ensuing picks were better, but that's mainly based on the low standard set with Jones. Dexter Lawrence should end up being a good player, but there were similarly-rated players at positions of bigger need. Trading up for DeAndre Baker was questionable considering the number of better corners on the board. I loved the Oshane Ximines pick, but a third rounder isn't enough to save a draft class.

Reasoning: Tampa's night started off great with Devin White. Unfortunately, it only went downhill from there. White has the potential to be a perennial All-Pro, while it wouldn't be surprising if the rest of the class couldn't manage a single Pro Bowl. On day two, the Bucs went with a multiple defensive backs for what feels like the fourth year in a row now. Both Bunting and Dean have great potential, but Bunting felt like a reach with corners like Greedy Williams still available. Plus, have the Bucs really not learned that trading up to draft a kicker never ends well. At least they waited until the fifth round this time.

Reasoning: While bolstering your offensive line is always smart in theory, both of the Falcons round one picks were reaches. Neither have the great upside you expect to see in a first round pick. Since the Falcons traded up to get McGary, they didn't pick again until number 111. With that selection, they chose the lightning-fast Kendall Sheffield. The problem with Sheffield is he has shown no ability to actually cover opponents, which is kind of important for a cornerback. The rest of their picks were the typical prospects you see on day three -- with the potential to make an impact, but something notable making that potential unlikely to come to fruition. Overall, not a great draft for a team on the downswing.